Don't drive your LTC plan
​looking only in the rear-view mirror!

Why the New Message is "Rate Stability"*:

​The Society of Actuaries estimates that LTC insurance priced and issued since 2014 has only a 10% probability of needing a rate increase ... and IF an increase were needed, the SOA estimates it would only need to average 10%! ^

Scroll down to read why this is true...

Rate Increase Paranoia
A wildly misleading conclusion perpetuated by the press as well as too many agents and financial advisors is that LTC rate increases will continue unabated into the future, including on newly-issued policies.

It is entirely understandable that consumers, agents and advisors would be worried about LTC rate increases as there have been many, very large increases on older policies - especially those issued before about 2010.

However, it is wrong to project the amount of increases on older policies onto new policies being issued today.  In a newspaper it is just bad reporting, in a financial advisory practice it borders on malpractice.

One agent group is irresponsibly telling clients that new Traditional LTC insurance premiums will increase 8% every year, for 20 years.  That is a total of a 366% rate increase and is not based on any credible data or even a reasonable reflection of increases on older policies.  And NO LTCI policy's base rates "increase every year."  This borders on illegal misrepresentation.  In fact if an agent tells you they don't or won't sell you Traditional (or any other type of LTC insurance), you need to find another agent!  CLICK HERE for tips on how to choose a truly independent LTC specialist.

It is important to understand that in-force LTC rate increases, even very large increases, are simply bringing those old, incorrect pricing assumptions up to today's more-credible, very-conservative pricing standards.  In other words, after all the rate increases, the "old policy" premiums are now close to equaling what is being paid by new applicants for the same starting new coverage at the same original-issue ages.*

While "Traditional" LTC insurance premiums are designed to remain level, and based on today's experienced and very conservative pricing models should be more rate-stable looking forward, they still are not guaranteed.*

Why did old rates increase so much?

All three pricing "mistakes" were unknowable as the LTCI business developed and moved through its formative years in the 1990s and early 2000s.  Were mistakes made?  Yes, including waiting too long to make corrections, but these three main drivers of premium increases came from factors that could not have been predicted.

​And now all three are corrected-for, already "baked-into" new premiums being charged on new policies being issued today.*  While there could be new factors that develop, or slight adjustments needed for interest and claims assumptions looking-forward, the level of increases we have seen on old policies cannot come back. 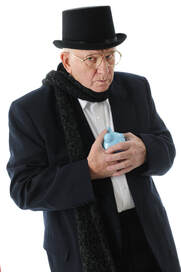 1. The No-Lapse Problem
People who buy LTC insurance never drop it! There are many more policies in-force than originally assumed. This is due to overestimating the “lapse ratio”, which is a very different assumption than the “claims rate”.

FOR EXAMPLE: If out of 1,000 issued policies you expect only 300 to remain in-force until the time a claim is likely, and if one-third go on claim, then the projection is that claims will ultimately be paid on 100 policies. But what if 900 remain in-force and 300 people go on claim? That is a 200% pricing mistake with the exact same “claims rate." This was the first and biggest mistake that every LTCI company made.

The overall LTCI actual lapse ratio is LESS THAN 1%!* No financial insurance product has ever had such a low voluntary lapse rate.

It is also important to note that even after more than a decade of serial LTC rate increases - some exceeding 150% - the lapse rate has barely budged; policyholders keep their coverage; there is no “death spiral" in LTC insurance. Said another way: 99.3% of people who bought LTC insurance - "traditional" LTC insurance - are satisfied with their policies!^

Most companies in the early to mid-1990s used a disability/health insurance equivalent lapse ratio of 7%-9% (clearly a mistake in hindsight). A few companies in the mid-1990s began to price what was then considered a very conservative lapse rate of 4% to 5%.

No financial insurance product had ever had a voluntary lapse rate below 3-3.5% (whole life insurance). Lapse rates of 2% or 1% - and less - were unthinkable, truly unknowable, and devastating, especially as the problem compounded year over year.

From the get-go a 4.5% rate versus a 1% reality is a 35% pricing mistake, after 15 years it is nearly double that (70%) just to catch up. Many LTCI companies waited too long to make corrections, and then they got hit with the 2008 market crash.

New Traditional LTC insurance premiums are now priced with a LESS THAN 1% lapse ratio.  This pricing mistake cannot come back!

2. Interest Rates
Because LTCI is a “long-tail”, “reserve priced” insurance product that is designed to collect premiums for many years, if not decades, before paying benefits the interest-earning assumption on the regulatory-mandated reserve funds is a critical component of pricing.

From the late 1980's until 2009 LTCI carriers assumed their long-term reserve earnings would be 6-7% as they had been for long-risk, reserve-priced life and disability insurance for 60-plus years. Suddenly the companies found themselves having to reset their new premium and maturing investments to a 3% - 4% reserve interest marketplace - HALF their projected rate of return on older policies and completely unpredictable. Interest rates have fluctuated – sometimes wildly – in the past, but never to this degree and more importantly never remaining so low for this long.

So, average claim durations were off: Women by about 50%+, men somewhat less, but these longer-than-expected claim durations were compounded by up to 10-times more people with coverage still in-force and going on claim, and then a drop to half the projected reserve interest earnings all created a perfect storm for LTC rate increases.

The Society of Actuaries estimates that we now have at least 70-times more claims data than in the early 2000s; that claims data is just now, finally, becoming “credible”, meaning there is a large enough pool of information to be accurately predictive instead of just being an informed estimate.  We are finally getting it right with actual claims (duration) experience.^

The Bad News:
We continue to need LTC rate increases on older policies to bring them up to today’s informed pricing standards.  That hurts, but the increases leave older policyholders with premiums no higher than new applicants pay for equal new coverage at the same original-issue ages.​

NOTE: It is NOT reasonable nor fair to project the level of LTC rate increases on older policies onto new policies being issued today which are already re-priced to include those corrections!*

The GOOD NEWS:
​The Society of Actuaries estimates that LTC insurance priced and issued since 2014 has only a 10% probability of needing a rate increase ... and IF an increase were needed, the SOA estimates it would only need to average 10%!^

Note that the SOA 2014 price point analysis assumed a 4.6% reserve interest assumption, policies being sold in 2020 are using 4% - in most cases even lower - so today's new policy premiums are even MORE conservative than in 2014.

Looking Down the Road 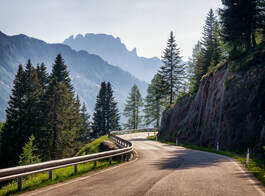 ...or driving your LTC plan by looking through the windshield,
​not just in the rear-view mirror...
​
​The good news: new policy rates have ALL these adjusted factors baked in.  The very reasons older policies are still getting rate increases cannot come back to impact newly issued policies because the adjustments are already priced in and are as conservative as possible.

There may be new factors that develop, or small changes for interest rates and claims durations, but the same mistakes, to the same degree, cannot effectively come back.*

For new buyers looking forward, new premiums are priced at 1% or less lapse, so that "mistake" cannot come back; new premium reserve earnings are priced about 4% or less, so if we stay current or even have slight increases in interest rates over the next 20-30 years, that mistake is permanently corrected; and we have nearly-credible longer-duration claims data driving new pricing projections.  Rates must be more stable looking forward.  Premiums are still not guaranteed on traditional policies, but they should be much more stable than old pricing.*

Guaranteed Premiums?
Do you – or your clients – want or need fully-guaranteed premiums?  We have that in many - but not all - of the Hybrid LTC plans but for significantly higher premiums.  What about getting something back - a return of premium or death benefit - if you never need care?  We have that available too, but again, for significantly higher premiums.

"Traditional" LTCI unquestionably provides the richest LTCI benefits for the lowest premiums paid, and it can guarantee Medicaid Partnership asset protection in all but a few states.

Traditional LTC coverage is poised for a dramatic resurgence if clients and their advisors will look beyond the irrational fear generated by "past performance" hindsight bias and misinformed headlines about LTC rate increases on old policies.

Finally it should be noted that in 41 states, and as far back as 2002, there are now significant "Rate Stability Regulations" (RSR) that have dramatically limited the number of and amount of increases for policies issued since a state's RSR implementation.  Post-RSR rate increases on average have been half of the rates on older policies which grab all the headlines.

Many consumers, agents and advisors understandably have very strong feelings about LTC insurance, especially unexpected and unexpectedly-high LTC rate increases.  BUT It is not reasonable or fair to project the level of LTC rate increases on older policies onto new policies being issued today which are already re-priced to include all the past corrections!*

What is your plan for care?  How will you pay for it?  LTC insurance – in any form – is a great tool that will not only survive but grow with better pricing assumptions and many new options to meet whatever needs a client and family have.
More LTC Planning Information
Contact us for a sales-free consultation! 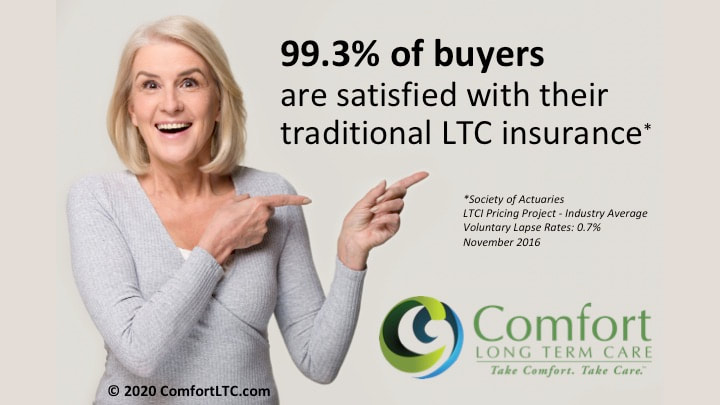 ^ Society of Actuaries LTCI Pricing Project, November 2016
* "Traditional" LTC insurance premiums, even on newly issued business, are NOT guaranteed; premiums can be increased. Traditional LTC insurance premiums are designed to remain level, but are not guaranteed to remain level. Premium rate increases must be applied to all policyholders in a state with the same type or "class" of coverage - no individual policyholder can be singled out or increased do to increased age or change in health; premium rate increases must be reviewed and approved by a state's department of insurance; in 41 states premium rates and rate increases on new policies are now subject to "Rate Stability Regulations" limiting the possibility and degree of future increases. Before buying any LTC insurance review the Outline of Coverage and the Personal Worksheet which disclose all limitations and exclusions and a company's rate increase history.  If your agent does not provide you an Outline of Coverage or Personal Worksheet rate increase history disclosure, you need a second opinion!
Updated 9/10/2020
CLICK HERE to download the updated NAIC "Shopper’s Guide to LTC Insurance"
Comfort Long Term Care is an independent insurance brokerage agency specializing exclusively in LTC insurance. Agency owner, Bill Comfort, is a LTC specialist celebrating 30-years of experience in 2021! We are based in the Raleigh, Durham, Chapel Hill, North Carolina Triangle region, but we serve clients throughout NC and across the country. We also have an office in St. Louis, Missouri.
​Click here to learn more about us!
The information on this website is for general informational and educational purposes only, and it is not intended to be a direct solicitation for the sale of any specific insurance company or policy form.  Not all policy types, options, or riders discussed in general terms on this site are available in every state.  Individual requests for specific company or policy information will be directed to a properly-licensed agent for applicable state of residence.  For complete information about any specific coverage - including limitations and exclusions - refer to a company-specific illustration and Outline of Coverage.